Therefore it just makes me really happy when I learned that Operation Wolfenstein is downloaded 2,069 times (on both itch.io and Tenor Games website)! Operation Wolfenstein (more narrative can be found on its own site) was launched on 14th February this year. I created the game over a longtime idea of mashing Operation Wolf and Wolfenstein 3D, and had no idea how it would be received after publishing it. Seeing the download numbers with originally little expectation, this is certainly encouraging.

When I built the game, my intention was to especially reach out to Android device users, thinking along the line that there are more Android device gamers than what I could find on Windows gamers (well, most or if not all of us use Windows for work, but more often than not, we don’t or can’t install games on our work computers). To my disappointment, Google Play refused to publish my game, citing that I had violated some regulations. They sent me a document to read and asked me to figure out by myself where the violation was. I couldn’t find it, and my questions to Google went unanswered twice. I resorted to using Facebook, Tumblr and Twitter to try to get the word out of Operation Wolfenstein. I knew these alone would not work.

Fortunately I chanced upon itch.io. I noticed that there were more Windows games published there, more than Android games, and even more surprisingly (to me), there were barely iOS games. I realised that whatever I thought I knew about the gaming market was probably wrong. I published Operation Wolfenstein on itch.io and started to receive more views on both itch.io and the Tenor Games website. 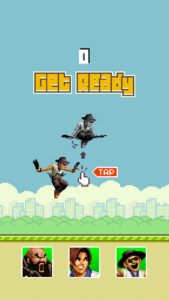 Five months doesn’t sound like a long time, but the time in between did feel long before I started to feel that perhaps I’ve got something going on what you guys think about my other games. Flappy Choi was intended to be a “made over the weekend” game, but because I am such a novice game developer, it took more than just a couple of weekends (and weeknights) to complete making the game. Once again, Google Play refused to publish my parody game and I relied on itch.io. The game was really created out of amusement, and I wasn’t really expecting a lot of downloads. I’m still rather happy though that as of today, the total number of downloads is 67 from both itch.io and Tenor Games website.

The most recent game I published was Surrounded, which looks just like a mindless top-down shooter. However, it really is a game about managing your resources. Your character is grounded on a fixed spot, starting with limited ammunition and weapons. A growing horde of zombie approaches and he will have to fend himself from them. If you started playing it firing your rifle as soon as you see them from afar, you will be in for a very rude shock in a minute. You will run out of ammo, and then wonder where to get more if you aren’t able to move around. After a while (and some deaths), you should be able to figure out when and how new resources will come from. And also, to give you a sense of accomplishment, the game can be completed. You’ll just have to figure out how to get evacuated while fending an increasing horde of zombies. Surrounded clocked 604 downloads from the Tenor Games website.

I hope you will enjoy more of my games as I create more of them. Right this moment, I am working on a fan game. After it is revealed, you should find the character somewhat familiar. Instead of its original gameplay, I am setting that character in a platform sidescroller. There will be new characters and I hope to make it really fun to play. Stay tuned, and thank you for your support.